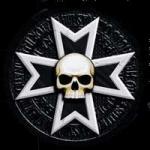 New players wander into websites or forums for Warhammer 40k all the time, but they usually find that they are missing some important pieces of language.  I'm referring to the commonly used 40k acronyms.  Without these "key-codes", those players are unable to understand what is being said or referenced.  Because most internet personalities take their knowledge for granted, a new player can easily get confused rather quickly.

Fortunately, I'm here to help.  This page is meant to provide a handful of important terms for the new Black Templars player.  Included will be all of the main Black Templars abbreviations, as well as several general terms for the game itself.  This list is constantly being updated, as there is no way that one can come up with all of the abbreviations being used in one sitting.  It will be updated as I come across more acronyms that need to be defined.  See some that I don't reference?  Send me an email and I'll add them.  :)