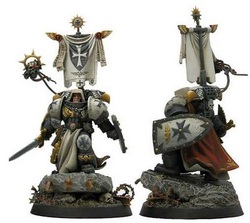 This is an issue that has plagued me (and great many truly competitive players out there) for a some time.  It is a problem that personally frustrates me beyond reason.  The issue I'm referring to is the idea that I must conform to someone else's perception of my army's fluff.  For example, because the Black Templars are zealous, knightly, and exhibit a preference for close combat, some people believe that I should be forced to produce an army that exemplifies these ideals on the battlefield.  Like it is some sort of unspoken rule.

To that I say:  "Ummm...no."  I strongly believe that each army's fluff is what that player makes of it.  Sure there is a certain amount of set-in-stone background, but most of it is wide enough to allow for different army configurations.  There are few things in the Warhammer 40k universe that are concrete, and that is one of its strengths.

In one of the forums that I frequent (B&C), a person asked how to outfit their army in general to the best effect.  It was noted by several, including myself, that gunline armies put you in an excellent position to win.  Then all hell broke loose.  Those simple suggestions produced comments like:


I cannot count how many times I've brought my Black Templars armies to a tournament or one-off game, win the battles, and then my opponent has the gall to tell me they only lost because I was running an "unfluffy army list". I've gotten emails here on Implausible Nature saying the same. Or that the fluff for my army doesn't fit the Black Templars Chapter, that it wouldn't happen "in reality".

Seriously, who the hell decides what is appropriate fluff for MY army. Let's get real here. There is no reality. We're 38,000 years away from a fictional time period. I decide how the fluff fits my army, not you. Certainly Games Workshop creates the fluff and the background for each army, but it is not set in stone. GW purposely leaves holes in their fluff to allow for player creativity. They crafted our Black Templars with the idea of us dispensing the Emperor's justice up close and personal, so we can ensure the foe is vanquished. But there is a problem with that narrow minded look at the BT fluff. You'll note that GW thought it was necessary to leave us with long ranged fire support, however limited our selections are. That's because our Marshals are not idiots. They are supposed to be the elite of the elite. Don't you think they'd soften up the opposition before assaulting in?

Only an idiot would send their warriors into a battle without the proper tools to be successful. Just like in the American Civil War during the Battle of Gettysburg. Picket's Charge (Google it if you're unfamiliar) pitted infantry against heavy artillery and a large infantry force on the high ground. And guess what? Pickett's forces were annihilated because they didn't have the tools they required to successfully beat the Union forces. The same is true for our forces in the 41st Millennium. Why wouldn't they use it? If they didn't, the Imperium would have fallen long ago. Hell, if Horus would have only charged the walls of the Imperial Palace without any fire support, we could have ended the Heresy with relatively little loyalist bloodshed. But he didn't, he used EVERYTHING he had to try and breach the walls.

In previous editions of the game, we could manage using only bare minimum fire support and that played into "everyone's" idea of a Black Templar. I call BS on that. Nowadays, to be competitive, we need to adapt and incorporate these limited fire support elements to be successful. There is nothing saying that my tournament army would not fit into the fluff of the Black Templars. Maybe I want all of my Templars to be armed with bolters, lascannons, and flamers. Not only that, maybe they'll all be in razorbacks with fire support dreadnoughts and predators. Maybe I'll not have even ONE close combat unit in my army. Who is to tell me that isn't fluffy? I created it using OUR codex, so how can it be not so? Fluffy armies are in the eyes of the beholder. And really, who cares as long as it is a legal army created from our codex? Chastising our fellow players about what they can or cannot do because its not "fluffy" is appalling and quite frankly, I'm disgusted to see it. These players, often new, go to forums such as B&C to learn from other player's experiences and sometimes all they get is someone criticizing them about something fluff related. That is unacceptable. I should not have to feel obligated to apologize to these players in Private Messages because I feel embarrassed for the treatment they received. If they want to be competitive, there is no need to limit the already small amount of valid choices in our codex even further because its not fluffy. You should craft the fluff to the army, not craft the army to the fluff.

Why Does It Matter?

Its not even that I get emails about my lists or tactics using the Black Templars or even about me at all...its just that I see people getting attacked all the time on various forums about how they are not conforming to their codex's fluff and background. That they cannot take such and such unit because "they wouldn't do that". We should be helping new players craft excellent lists, giving great tactical advice, or answering their questions. Not criticizing them because the units that player decided to take doesn't fulfill another player's view of the fluff. I feel that if its in the codex, its part of the fluff to use it. Now, does it mean that is the preferable method of attack for that army? Probably not. But doesn't mean that the tactic or part of the army isn't used. ;)

I can take comments like that from people who call me a power gamer or WAAC player. That's fine, I have a thick skin. Besides which, I know I'm not one. If being attacked is the cost for providing a needed educational service to players, I'll gladly pay the price. The divide between competitive gamers and casual gamers has only gotten larger over the years, and it saddens me to see it. Don't get me wrong. I got into the Black Templars because of their close combat oriented nature when they were released in Codex Armageddon. I wish I could still continue to play them solely in that nature, but to be competitive nowadays on a national level (or even internationally), a significant ranged fire support element is needed. I'm continually playtesting hybrid lists to try and find a balance between the two. But until we get a new codex, we're just kinda stuck taking long range weaponry in competitive lists. Just the way it is. *shrug*  :(

Even still, this isn't even about just the Black Templars.  This can be applied to any army in the 40k universe.  A person buys an army with an idea in mind with how they want to play it.  If it is allowed in the codex, no one should have the right to say that it is the wrong way to play.  Because ultimately, each of us play to gain something from this hobby.  If it ceases to be fun for a player, they'll quit the game.  You absolutely cannot constrain yourself to the established fluff for an army, chapter, craftworld, hive fleet, etc.  Think outside the box.  Expand on the fluff, or if you feel up to it, design your own.  The established background for each race and army is a starting point for creating your forces, not the end point.  It sets you on the path, but nothing stops you from venturing out on your own.  Many have been successful doing as such, and often, it can be a quite rewarding endeavor.  Your army can be just as fluffy and unique as any that follow the strict guidelines of the codex.

Comments like "I expect there will be a lot of lists like this. Maybe not to this uber-spam extent (which always makes a list look dirty) but don't be surprised if you see similar armies.", only make me want to ignore your advise.  Learn to see beyond the fluff, beyond a person's level of competitiveness.  Appreciate the fact that you have an opponent at all, and enjoy the game.  :)