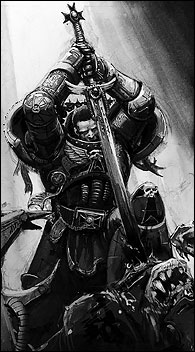 Now its time to develop some fluff for these zealous warriors of the Emperor.  While I'm not as good a story teller as Tiger Raja, I will attempt to give my Black Templar the credit they deserve while giving them an interesting background story.  While in the early stages, its likely that most of this will be background information (i.e. tactical tendencies, crusade makeup, mannerisms, and other fun details).  The goal is to make these superhuman warriors as compelling as I'm able, so I can be proud to place each and every model on the table top!

1) A simple petition led a sizeable group of Black Templar warriors (~500 strong) led by Marshal Laeroth to join forces with a new founding chapter, the Crimson Tears for mutual benefit.  With their shared lineage to Primarch Rogal Dorn, this alliance was a natural fit for the two chapters.  The Crimson Tears needed a homeworld and the Black Templars needed new recruits.

2) The problem was, the system of Njesta was infested with the vile Dark Eldar xenos.  It had been generations of continual raids on the hive planet, leaving the inhabitants fearful of the very dark.  Nevertheless, the system was known for its fierce PDF forces, as well as its industrious manufactorum.  This system needed to be brought back to the Emperor's Light.  Unfortunately, the Drukhari were numerous and well entrenched with direct webway links to the system.  Far too many enemies to be handled by a single new founding chapter themselves.

3) After several months of intense fighting, the Drukhari were eliminated from Njesta, the Black Templars began their recruitment processes to replace their losses and bulk up their numbers.  The Crimson Tears took similar losses, but deferred to their allies for the initial neophyte induction.  With the help of the BT fleet's forge ships, the Crimson Tears built an impressive fortress monastery.  The Black Templars began their preparations to leave the system to rejoin the rest of the chapter's forces.

4) But alas, Cadia had just fallen, unleashing the Cicatrix Maledictum upon the Imperium.  This massive warp storm tore through Njesta and immediately drove much of the Crimson Tear chapter insane.  This gave the Dark Gods of Chaos an opportunity by turning the once loyal marines against the Imperium.  Fortunately, all was not lost, as roughly a quarter of the Crimson Tears chapter had remained loyal to the Emperor and fought the traitors, led by Chapter Master Stasius Kaius.  Once the Black Templars had returned to the planet of Njesta, the loyalists managed to link up and coordinate their attacks.  With the approval of High Marshal Helbrecht, the Black Templars called a crusade to crush this traitor chapter and after severe casualties to their own number, the Crimson Tears Chapter was eventually destroyed.  None of the loyal Crimson Tears, save the Chapter Master, survived the battle for Njesta.  But all was not well for Kaius.  During the final battle, he was mortally wounded by a fell daemon prince of Chaos.  Even so, his formidable willpower did not waiver until he had banished the daemon back to the warp.  Due to his unrelenting courage, exceptional battle prowess, and loyalty to the Emperor, Kaius was honored with interment into one of the Black Templars' ancient dreadnoughts.  From this armored behemoth of destruction, Kaius could exact his vengeance upon the Emperor's enemies side-by-side with the Black Templars.

5) Many of the surviving BT marines dyed their tabards and robes a crimson red to give honor to the loyalist brethren (both Crimson Tear and Black Templars) who fell to the traitor Chapter.


OTHER FACTS:
* This detachment of BT (currently known as the Njesta Crusade) has a permanent Emperor's Champion and his name is Lysanthir.
* The vehicle names in this army use Latin, just because it looks and sounds cool.
* This crusade is known around the Chapter for its use of vehicles.
* Gold crusader seals (purity seals) were given to each of those with confirmed Crimson Tear kills as to help protect them from their taint.
* Crusade badge is in the form of a crimson tear and is located on various parts of the power armor.