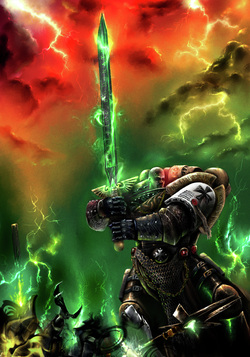 First off, I want to welcome you to Implausible Nature!  If it wasn't for my readers, I would have lost the will to continue maintaining this website long ago.  Thank you all for your feedback, comments, suggestions, and emails!  They are what keep me going!  While it may seem like I think so in my writing, I am not perfect and do make mistakes.  Nor do I claim to win every game I play.  I do not consider myself a Black Templars pariah.  This site isn't about stroking my ego, its about helping my fellow players.  And in doing so, I'll be helping to create a culture of strong, competitive Black Templars players.

With that being said, this website was created with a goal in mind.  To help new and veteran players become better with the Black Templars.  This also extends to players who have returned to the game after a long hiatus and just need a nudge in the right direction.  My primary focus is on the Black Templars and the players who use them.

When I mentioned that I'm trying to help players "become better", I mean from a competitive standpoint.  I hold no allusions about that.  I'm a competitive player and I play to win.  I love the feeling of competing against a skilled opponent on the battlefield, testing our prowess, and pitting our armies against each other.  This website is designed to help players learn how to win competitive games.  A competitive player knows what armies are good, how to build them, and the tactics involved.  A casual player often is more concerned with the look and feel of their armies, over their functionality on the battlefield.  This isn't a bad way to play, nor is it wrong in any way; each player should do what makes the game fun for them.

I want to make this absolutely clear: I play to win, but I also play to have fun first and foremost; I just find a higher level of fun playing competitively.  However, that doesn't mean I don't enjoy myself playing the game with friends over pizza and some beer.  Casual play just isn't my normal thing, so read everything here on Implausible Nature with that in mind.  Knowing this, it shouldn't come as any surprise that I believe its better to craft the fluff to the army, than to craft the army to the fluff.

In addition to being in the competitive mindset, I should also note that I play in the United States.  Tournaments here are generally not comped, most of our terrain grants at least partial LOS, and there are quite a few more tournament venues than what other countries might have (besides maybe the UK).  That means I'm not going to get docked points, just because I took a "spammy" list to a tournament.  My lists are built with these ideas in mind.

As I mentioned, I play to win.  That doesn't mean I don't respect the casual player and their opinions.  However, I feel it is easier to learn to become competitive and then transition to casual-play mode, than it is to do the opposite.  Because of this, it is my preference to teach players to become competitive so that they understand all aspects of the game.  This does not mean I'm trying to breed "Win At All Cost" (WAAC) players, assholes, or power gaming individuals.  I do not condone such play, as sportsmanship and respect is of utmost importance in our game.  Being a competitive player does not give you a license to "Club Baby Seals" at will or become a dick.  On that same token, if you're a casual player, it doesn't give you the right to place all competitive players in a stereotypical group that only a very small group of players actually belong.  Sportsmanship, and therefore the fun factor, is everything.  It is the reason we play this game in the first place.  Also remember that everything here on Implausible Nature is my opinion of the best way of doing things, but it doesn't have to be the only way.  If you find something that works for you, all the power to you.  I just might not agree with it as a whole, and I'll let you know why.  Please do not get offended.  You can find more about why I built Implausible Nature and the reasons behind my list building strategies here.

Nothing good ever comes free, as they say.  Everything you see here comes out of my pocket book.  The hosting, domain name, directory and index submissions (for search engine optimization), and the time put in maintaining the website, are all at my expense.  But it is a price that I'm more than willing to pay to create strong Black Templars communities.  It is my vision that this website will become the ultimate resource for these armies.  I don't think this site will ever become as popular as "Yes The Truth Hurts" or "Bell of the Lost Souls", but perhaps it'll grow that successful in its own way.  I want it to become a place where player questions can be reliably answered before they need to be asked.  That is the goal.  I want to mention that you'll never see any advertising here on my website.  I believe that it causes unnecessary distractions and no one likes to see those ads anyway.  I don't run this website for money (no ads), for power (no real power), or any other tangible purpose.  Implausible Nature exists purely because of my desire to help people.  That is it.  I have no other agenda than that.

There are a couple of places here on this website that you should take note of.  First, is Laeroth's Blog.  This is the place where I blog about random things in the hobby, from tactica, internet drama, national tournaments, army lists, or updates to the website.  I might also have random rants on various topics posted there.  I encourage comments on any or all of the posts here.

Next, one of the calling cards of Implausible Nature is the Black Templars 101 Guide.  This guide focuses on teaching new BT players the fundamentals about the codex including: list building skills, how to build the army, and tactical advice.  Also included in the BT 101 guide is my discussion on Duality, which is one of the most important parts of building balanced 8th Edition lists.  After reading the BT 101 guide, I would appreciate it if you filled out the Reader Satisfaction Survey.  I may not be able to respond to all of the surveys, but I do read them all.  At some point or another, I address the comments and questions in these in my blog or other articles on the website if I didn't actually reply to the survey itself.

Finally, my personal BT army lists can be found here.  These are the lists that I presently use in games.  Each list will be followed by a decent sized write-up on unit choices and basic tactical analysis.  Please note that not all lists contained there are ultra-competitive.  The army's competitiveness will be noted in the analysis section beneath each list.

I hail from Grand Forks, North Dakota and the Land of Frozen Tundras.  I'm began my journey of playing Warhammer 40k in early 2000 (3rd Edition) at a local Hobby Town USA.  A small investment later and I was well on my way to building my first army:  the Ultramarines.  After playing some games, I found my niche in close combat and tended to field armies with this in mind.  With the release of Codex Armageddon in late 2000, my permanent army was reborn in the form of the Black Templars chapter.  They embodied everything that is zealousness, fury, and honor.  I couldn't get enough of them.

At the beginning of 2009, I decided that I was going to join the online Warhammer 40k community so that I could build on my already significant experience in the game (and more specifically, with the Black Templars).  My adventure was enlightening to be sure.  It quickly opened my eyes to differing perspectives on the game, each codex, and tactics in general.  Surprisingly enough, this has allowed me to become a much better player.  However, there was one thing missing from the internet.  A solid Black Templars website.  Several sites existed that focused on the BT but they were either outdated, contained questionable content, or were devoted to the hobby aspect of the game.  If I had been a new player wanting to try out the Black Templars, there would have been only a small handful of useful places to glean information from (all of which were forum based).  So I decided to address this issue and created Implausible Nature in September 2009.